As a biologist and chocolate lover, I found it amazing to discover that there was very little in the scientific literature about the natural pollination of cocoa. Realizing that the insects that pollinate cocoa were little known, particularly in Colombia, I wanted to find out a little more in order to contribute to this area of knowledge. Since college, I have been interested in entomology (area of biology that studies insects) and I had the opportunity to learn about the various orders of insects. I contacted Luker Chocolate for my degree project in 2018. They gave me advice and support for the research I wanted to conduct involving cocoa pollinating insects. The results were encouraging and the information turned out to be very valuable. So much so that we are still continuing with the project to this day.

Pollination is a process that allows seeds to be formed in plants. It begins when pollen grains from the male part of a flower come into contact with the female part of the same species, and ends when the pollen grain successfully fertilizes the ovule, producing one or more seeds. Pollination can be manual or mediated by various vectors such as water, wind, vertebrate animals such as birds and bats, and invertebrates such as butterflies, bees and flies. Flowers provide food or shelter for their visitors and, in return, visitors carry pollen from one flower to another resulting in new individuals.

The Theobroma cacao tree produces about 250,000 flowers per year and these are hermaphrodites; that is, they have both male and female parts. However, a cocoa flower cannot self-pollinate and needs pollen from another flower – from another flower or from the same tree – in order to create offspring. Cocoa flowers are strictly entomophilous pollinated, meaning that they can only be pollinated by insects, particularly tiny flies belonging to the Ceratopogonidae family. This limitation is due to several factors: 1) the flower is only two centimeters long; 2) the pollen is protected by the petals, and 3) because of its shape and texture, the pollen cannot be transported by wind or water.

Only a very small, hairy insect (such as ceratopogonids) can enter the cocoa flower and access the pollen. Only about 10% of flowers are pollinated; and the flowers that are not, are aborted as the plant’s natural mechanism. Of the total number of pollinated flowers, less than 5% develop into mature fruit (Groeneveld et al., 2010). 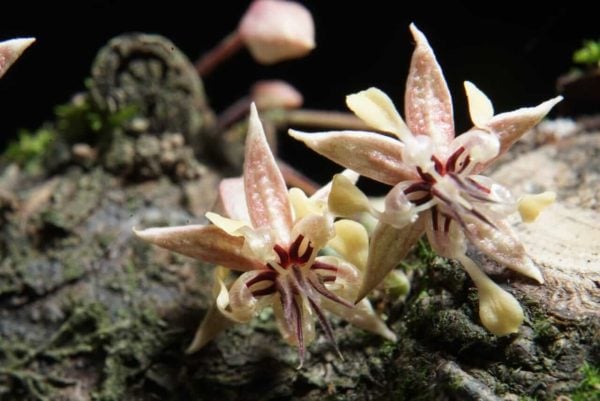 Hand pollination is used on crops in order to ensure fruit production. An inexperienced farmer can perform the process in 50 seconds, while a more experienced farmer can do it in half that time. On the other hand, a pollinating fly can visit between 300 and 7000 flowers per day. However, since there are no local studies on pollinators, we cannot be certain about their effectiveness in Colombian crops. Studies related to pollination and pollinating insects in Colombia are few and very old (they were carried out between 1970 and 1980). 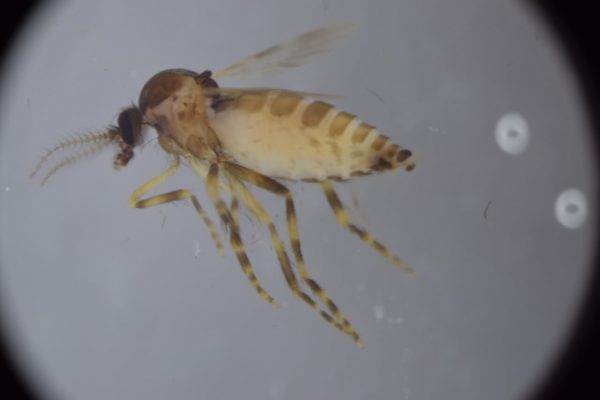 Forcipomyia female with eggs inside.

How do insects in chocolate make a symbiotic relation with cocoa trees?

The entire life cycle of pollinators occurs in cocoa plantations, where they find everything they need for proper growth, including:

Given how small they are, it is not possible to make direct observations of these flies, capturing them while they are flying is very difficult, which is why we decided to look for other means to collect them. We used cone-shaped traps of 80 centimeters in diameter with a plastic collecting jar, and we placed them on the leaf litter (layer of leaves on the ground). We left the traps for 15 days under the trees to ensure that the adults flew to the top of the trap and then fell into the jar with alcohol. We then took the jars to the laboratory and separated the captured insects one by one using a stereoscope to identify them correctly.

Our study on cacao tree facts and insects

We started the process using different substrates in order to check whether there was something that attracted more pollinators such as tree stems associated with the crop or the excrement of herbivorous animals. The latter did not prove to be a good attractant, but the banana stems did, given the moisture they retain. In total, we counted 1522 pollinating flies during the two months, an average of six pollinating flies per tree. With the use of banana stems on leaf litter, we found an average of 11 individuals per tree. This increase was slight but significant. 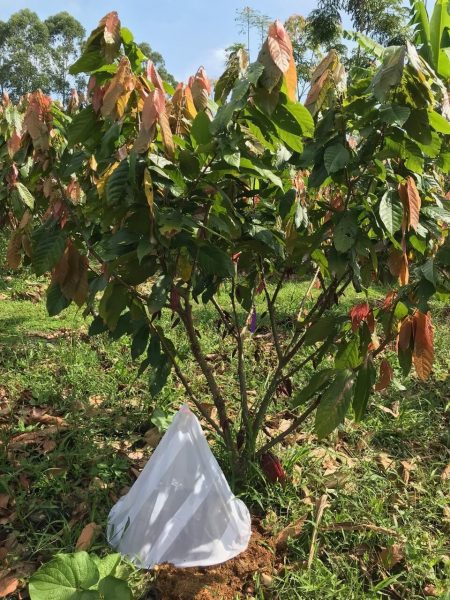 The second sampling was carried out between September and December 2019. On this occasion, we found 1030 pollinating flies in Luker’s fino de aroma cocoa plantations of Casanare, Necoclí, and Granja Luker. In this case, we did not do experiments since the objective was to count the number of pollinating flies during the rainy season. With these data, we could compare the results with other drier seasons in other months of the year. During the rainy season, we were able to count up to 100 individuals on a single tree, however, with an average of seven gnats per tree analyzed.

Finally, from January to July 2020, we found 164 pollinating individuals in Casanare, Necoclí and La Granja. In this case, the average has been less than one individual per tree. The few pollinators exist due to the dry season since the flies need a humid place to survive. The direct sun and the little shade do not allow them to establish themselves and dry them out very easily. These results show the importance of shade and humidity in the crops to protect the fine flavour cocoa trees and their pollinators.

At El Paraíso, Luker Chocolate’s cocoa farm in Casanare, African palm is being replaced by cocoa. The African palm crops have a negative impact on general biodiversity and on some specific groups of insects such as butterflies, ants, and cockroaches. In this last sampling, we put traps under palm trees and we almost always found less than 80% of the insects in the traps under cocoa trees. Surprisingly, after only 3 years of replacing palm with cocoa, we found much more diversity than expected and we even found pollinator populations beginning to establish in the crop. This is a very encouraging result as it indicates that just by replanting other trees such as cocoa, we can begin a process of ecosystem restoration, particularly of the entomofauna (insects that live in the soil) that had been lost due to years of palm cultivation and that may be helping the soil’s fertility and its agricultural capacity. 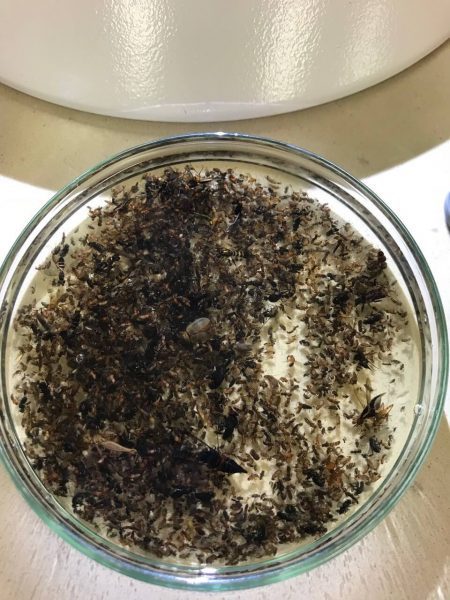 Why are flies important for cocoa trees?

We continue to explore and search for answers to the differences between pollinator populations including some climatic variables and other factors that change in crops such as cocoa clones, crop age, irrigation system, etc. Our objective is to improve the productivity of cocoa crops, to be the pioneers in this field that is practically unknown in Colombia, and then to transfer this knowledge to the cocoa farmers we work with to improve their agro-productive practices.

The results we obtained are extremely valuable. For the first time, we reported the presence of pollinators in Luker plantations, one of the first actual records in Colombia, and by using photos we were able to record cocoa pollinating insects, which had previously only been seen in books. Thus, for the first time, we show cocoa growers and agronomists what one of their great allies in cocoa cultivation looks like. Finally, knowing the relationship between the cocoa plant and the pollinator is necessary to properly manage agroforestry systems, their diversity, and to understand the complex process of pollination. If we know enough about the pollinator population, and about how to increase and maintain it, it can be used to benefit production and farmers. It constitutes crucial knowledge for boosting the productivity of the cocoa crop. 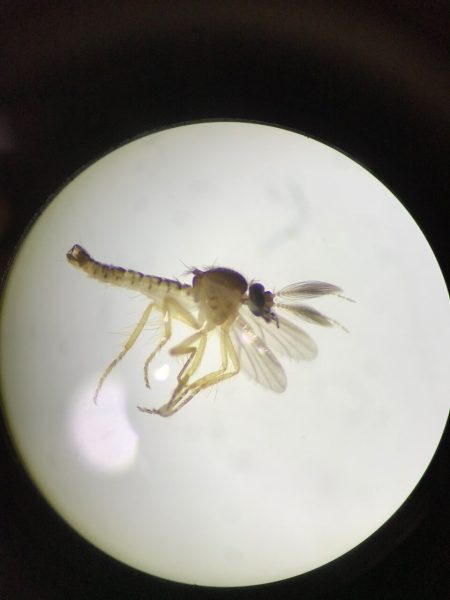 Are you curious to learn more about the role of mosquitoes in cocoa production? The following article might be useful:

If you want to review the magic behind our fine chocolates crafted at origin, check out these articles: 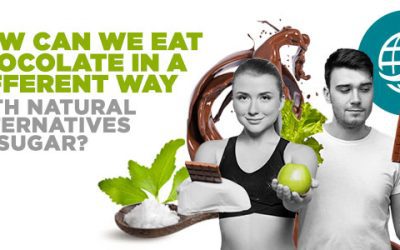 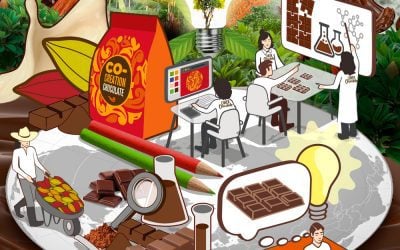 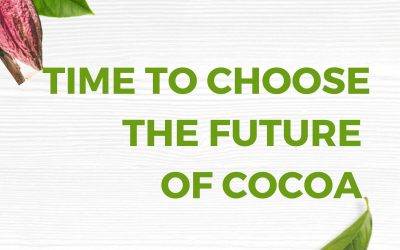