Taking a trip to Colombia and living the #LukerExperience has proved an eye-opening experience for Le Salon Du Chocolat owner Dawn Shrives. She’s returned from the visit with a new appreciation of chocolate production and full of ideas as to how her Chichester-based business can help support the work being done in the South American country.

Set up in 2004, Le Salon Du Chocolat is a chocolate studio where visitors can try their hand at themed workshops and parties. Dawn also gives talks and demonstrations to local organisations and schools.

But Dawn’s passion is the ‘quality of chocolate from its source of cacao beans to the finished product. She explained:

Particularly over the last 20 years as the demand for cocoa beans has increased, forcing the price upwards, many big chocolate brands that we have grown up to love are now using less cocoa and bulking their products out with cheaper alternative vegetable fats and wheat flour. Thus the finished products are described as ‘bars’ or ‘chocolate flavored’ as is it no longer contains enough cocoa to be able to call it ‘chocolate’.

Artisan chocolatiers are going back to using chocolate that contains only the basic ingredients that are needed. The couverture (chocolate buttons), which I use in my workshops, is made in Belgium and is a blend of cacao beans generally from Africa which is the source of around 70% of all cacao beans harvested. However, I also use couverture made with cacao beans from other growing regions such as Colombia, Peru, Costa Rica and when made from a single origin rather than a blend, give the chocolate a unique taste specific to that region.

Dawn was one of 20 chocolatiers who traveled to Luker Chocolate, Colombia, on a trip to see for herself how cacao is cultivated, harvested, and made into chocolate while learning how Luker is supporting their cocoa farmers, families, and local communities. Luker, a family business set up in 1906, is a Colombian cocoa supplier and chocolate maker that believes cocoa production can deliver positive societal change: “We believe that chocolate makes the world a better place.” Luker Chocolate purchases almost 40% of the total cacao produced in Colombia and all cacao beans meet their ‘Fino de Aroma’ standards – fine cacao making up only 7% of the world’s total cacao.

“The whole trip was a real eye-opener,” Dawn said. “Luker is one of the biggest companies in Colombia. What is different about Luker compared to other cacao growers is that it makes the whole product from bean to bar in Colombia, meaning it uses Colombian sugar, milk, and labor, exporting the finished product rather than just the cacao beans. So Colombian dairy farmers and sugar cane growers also benefit directly.”.

Dawn’s chocolate journey started the moment they touched down in Bogota with breakfast at the Luker factory of traditional hot chocolate, brioche, and cheese. This was followed by a chocolate tasting.

“Every single stage of how the beans are grown, harvested, and processed into our chocolate makes a huge impact on the final taste”, Dawn explained. “One example was tasting chocolate that had been made with beans roasted at 130 degrees compared to those at 160 degrees. The difference in degrees had made the chocolate almost inedible!”.

The group was flown to Granja Luker – a training and research center where the farmers are educated, and fino de aroma beans are cultivated and grown into saplings which are sold to farmers for their own plantations. Since its founding in 1962, Granja Luker has educated 700 farmers a year to grow and cultivate Fino de Aroma cocoa beans.

One highlight for Dawn was a visit to Necocli, which is very near the gateway to Panama. A few years ago, Luker planted 550 hectares there with 600,000 new cacao trees, creating 180 new jobs in an area known for armed conflict. The villagers, including their three schools within this area, have been hugely supported by Luker.

Dawn said: “We visited two of the schools within the cacao plantation and were asked to take the children’s educational gifts and tell them something about our lives. I took postcards of Chichester and the Witterings to show the children where I live and so they can use them to write back to me and I will pass those to local schoolchildren. I would love to be able to make a connection with schools in West Sussex and Colombia.

The village within the cacao plantation known as ‘Caribia’, has been transformed thanks to The Chocolate Dream project. The Chocolate Dream was born out of Luker Chocolate’s long-term vision to lead social and economic development in the cocoa-producing regions. Luker began to wonder about their responsibility as a company. What more could they bring to the countryside, to the people, the children, and neighbors? Volunteers working under The Chocolate Dream project have helped to paint houses, encouraged villagers to start up micro-businesses with their traditional cane weaving and jewelry making. On the coastal strip of Necocli, they aim to build the town into a thriving holiday destination. The Chocolate Dream Project has helped at least 11 new start-up businesses including a young lad to set up a micro museum after he discovered ancient artifacts dating back to the Spanish settlement in 1509 buried in his garden.”

The trip has transformed Dawn’s outlook.:

She said: “I feel so privileged to have been given this opportunity to visit Colombia and learn the history and story behind the lives of people who are growing great chocolate.

Having used their chocolate for over a decade, and now seen the work that Luker and their Chocolate Dream project are doing, I am so excited to help them share this story Maria de Restrepo was a member of Luker Chocolate’s founding family.

Every Saturday, in Manizales, she would stand at her window to give out chocolate to the homeless for the sole reason of consoling them and making sure they had food in their stomachs. At that time, there had been no research on the ‘happiness of eating chocolate’, but what she did and the chocolate she gave out must have comforted many. I guess that by using Luker chocolate today, I am doing the same – not only supporting the families at the source of this journey but by bringing the happiness of sharing their fine chocolate with my customers. The Swiss named cacao ‘Theobroma’ in the 18th century, meaning ‘food of the gods.

I like to believe I am a modern-day version of a ‘chocolate goddess’ and it is my duty to bring the best chocolate to everyone’s door. And if it can be done in a way that I know I am helping and supporting the families that supply it, then that’s even better.” 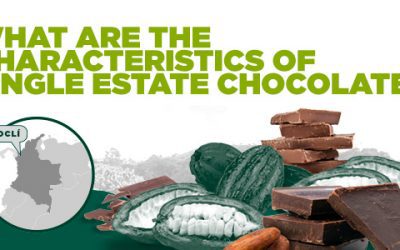 What are the characteristics of Single Estate chocolate?

Predominant and very defined notes that are almost impossible to find in other chocolates. Discover the intricacies of this unique chocolate. 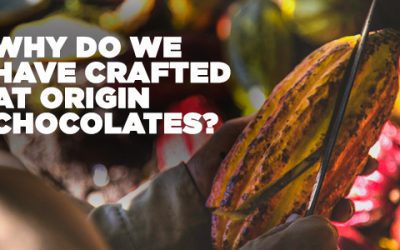 Why do we have crafted at origin chocolates?

Crafted at origin chocolates are a great match for bean-to-bar products because you can rely on a process that is traceable and transparent. 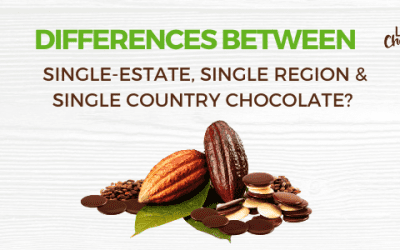 What are the differences between single-country, single-region, and single-estate chocolate?

If we want to talk about chocolate, we need to know what are the different categories in which we can classify the product.